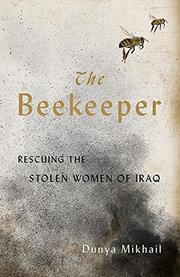 An Iraqi journalist and poet long resident in New York returns to her native country to chronicle the misfortunes of Yazidi women under the rule of the Islamic State group.

The country of the Yazidi lies outside Mosul in northern Iraq. Under the control of IS, also called Daesh, it saw the rise of two kinds of smugglers: of cigarettes and of captive women. Using tobacco was strictly forbidden under IS, to great penalty, but kidnapping women was a luxury, a prize of war, that was met by Yazidis and sympathetic Arabs smuggling them back to their families, sometimes impregnated by their captors. The beekeeper of Mikhail’s (The Theory of Absence, 2014, etc.) title likens the stolen women to queen bees, the work of rescuing the sabaya, or sex slaves, to apiculture: “We worked like in a beehive,” he says, “with extreme care and well-planned initiatives.” The women are psychologically damaged and do not always reintegrate easily into Yazidi society. Their accounts are harrowing; one tells the author of being raped by a Daesh fighter who sang, “Oh, Muslim, come, there’s a virgin in heaven” before assaulting her each night, promising her that in the afterlife she would remain a sex slave to serve the faithful, who “would kill themselves to meet their houris in heaven.” Mikhail bears witness to them and other women in war-torn Iraq, women who have scarcely known peace throughout their lives. That she is a poet is clear on each page, as when she writes, “maybe Kurdistan is a daffodil that has only wilted temporarily, only temporarily.” She writes affectingly and well, but newsworthy as it is, her account follows two major books—Cathy Otten’s With Ash on Their Faces and Nadia Murad’s The Last Girl—on the same subject and may be lost in the shuffle. That would be a shame, for it is a meritorious, urgent book that deserves an audience.

The Transformative Quality of Poetry