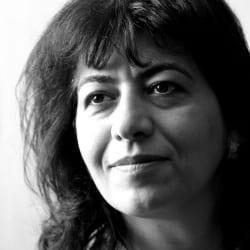 Dunya Mikhail was born in Iraq (Baghdad) and came to the United States thirty years later. She’s renowned for her subversive, innovative, and satirical poetry. After graduation from the University of Baghdad, she worked as a journalist and translator for the Baghdad Observer. Facing censorship and interrogation, she left Iraq, first to Jordan and then to America (Detroit). Her first book in English The War Works Hard (translated by Elizabeth Winslow) was shortlisted for Griffin and named one of “Twenty-Five Books to Remember from 2005” by the New York Public Library. Diary of A Wave Outside the Sea won the Arab American Book Award.

Her newest book The Beekeeper: Rescuing the Stolen Women of Iraq (co-translated with Max Weiss) is selected by Publishers Weekly as one of top ten in non-fiction for spring 2018. Her other books include The Iraqi Nights (translated by Kareem James Abu-Zeid) and 15 Iraqi Poets (editor).

In an NPR interview, Mikhail said, “I feel that poetry is not medicine- it’s an X-ray. It helps you see the wound and understand it. We all feel alienated because of this continues violence in the world. We feel alone, but we feel also together. So we resort to poetry as a possibility for survival. However, to say I survived is not so final. We wake up to find that the war survived with us.”

Mikhail’s honors include the Knights Foundation grant, the Kresge Fellowship, and the United Nations Human Rights Award for Freedom of Writing. She is the co-founder of Michigan-community-based Mesopotamian Forum for Art and Culture. She currently works as an Arabic special lecturer at Oakland University in Michigan.